You'll never see the end of the road while you're traveling with me. 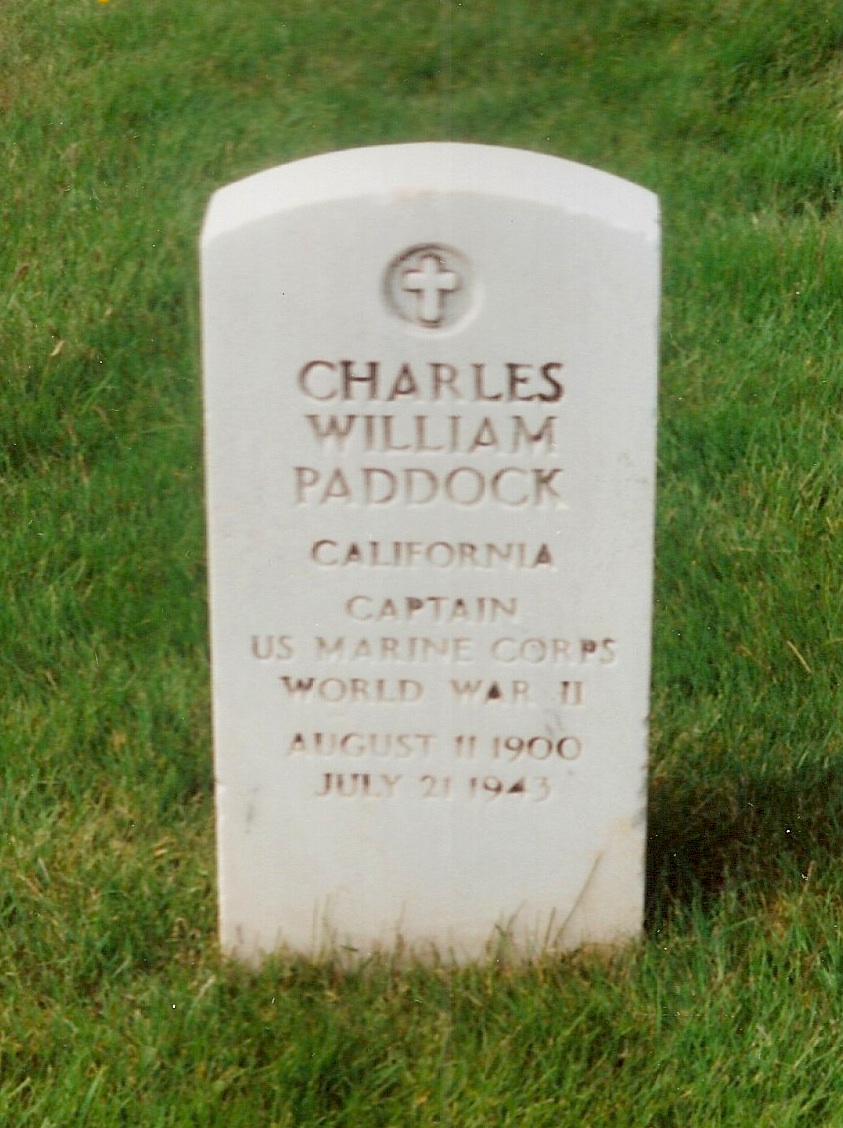 Charley Paddock, world's fastest human.
Thank you for your service.

A couple weeks ago, when my wife was at a rehearsal for her new play, we had movie night. I chose Chariots of Fire. Amazing how, when no one goes out of their way to tell a child that something is BORING, that a young person can actually find interest in something.

We never told our kids that spinach is disgusting, so they enjoy eating it. But go ahead, keep reinforcing stereotypes, nothing self-fulfilling about that.

Anyway, he is interested in history and she is really into running. They have experienced the Olympics before, there was a lot of talk about (at least, once we left Scotland.) The unbridled joy and anguish experienced on the slow-motion faces of the runners never tires.

American runner Charley Paddock (Dennis Christopher, Breaking Away, The Fan) takes his trowel from its case, the boy, surprised yelled, "He's got a knife!" We had to stop for a moment and converse about the history of starting blocks.

For our honeymoon in 1999, my wife and I took an Alaska cruise. We enjoyed the land excursions much more than life on the boat. I was interested to learn that Paddock (two gold medals, 1 silver in Atwerp 1920, one silver, Paris 1924) who was serving in the Marines during World War II died in a plane crash near Sitka, and was buried in Sitka National Cemetery.

As that was the only name familiar to me in the guide book, I thought I would search for it. But I have been to American military cemeteries before, you can't hope to find a grave without any indication of where it is. And yet, that's exactly what happened, I found Captain Paddock's stone after less than five minutes. That's my own photo at the top of the page.

Romeo & Juliet 20th Anniversary Playlist
Girls & Boys - Blur
Don't Dream It's Over * - Crowded House
Loser * - Beck
Does Your Mother Know - ABBA
Mystery Dance - Elvis Costello
Walking To You - Everything But the Girl
Dumb - Nirvana
Hidden Track - The Offspring
Creep - Radiohead
Get Me - Everything But the Girl
Posted by pengo at 2:38 PM 4 comments: 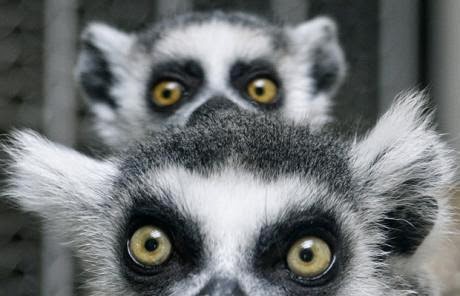 Two weeks. I began feeling ill Sunday night -- two weeks ago, Sunday night. Cold-like symptoms which were compounded by a day in a drafty rehearsal hall and several rainy days and nights. I thought I was pulling it together by the time the girl and I ran the 5K on Sunday, but on Monday I crashed again and spent Tuesday sick in bed.

The lawn grows so fast and I am a week behind, on everything. Yardwork, housework, house plans, it was all I could do to get to the office to participate in actor-teacher auditions.

And no running. Not even feeling like running. It's the best part of the year, and I'm just missing it.

Moving forward. Best start to a three-day weekend - sleeping in (without getting a headache) making up for two weeks of illness without ever getting to sleep in.

Even better, 90 minutes of writing and thinking and writing. Yesterday I feared the new work, this morning I contributed to it. Big difference.

Then, a run. Perfect weather. When you push it out to four miles (via Cain Park) you get water.

Saw two child-sized hoodies, hung or draped over fire hydrants, as if and the walk home yesterday some kids deduced. “Hey! Wow! I’m never going to need this again!”

Damn. That is some funky  early 90s old school.

And now, yardwork. Everybody have a good weekend.
Posted by pengo at 2:19 PM No comments: 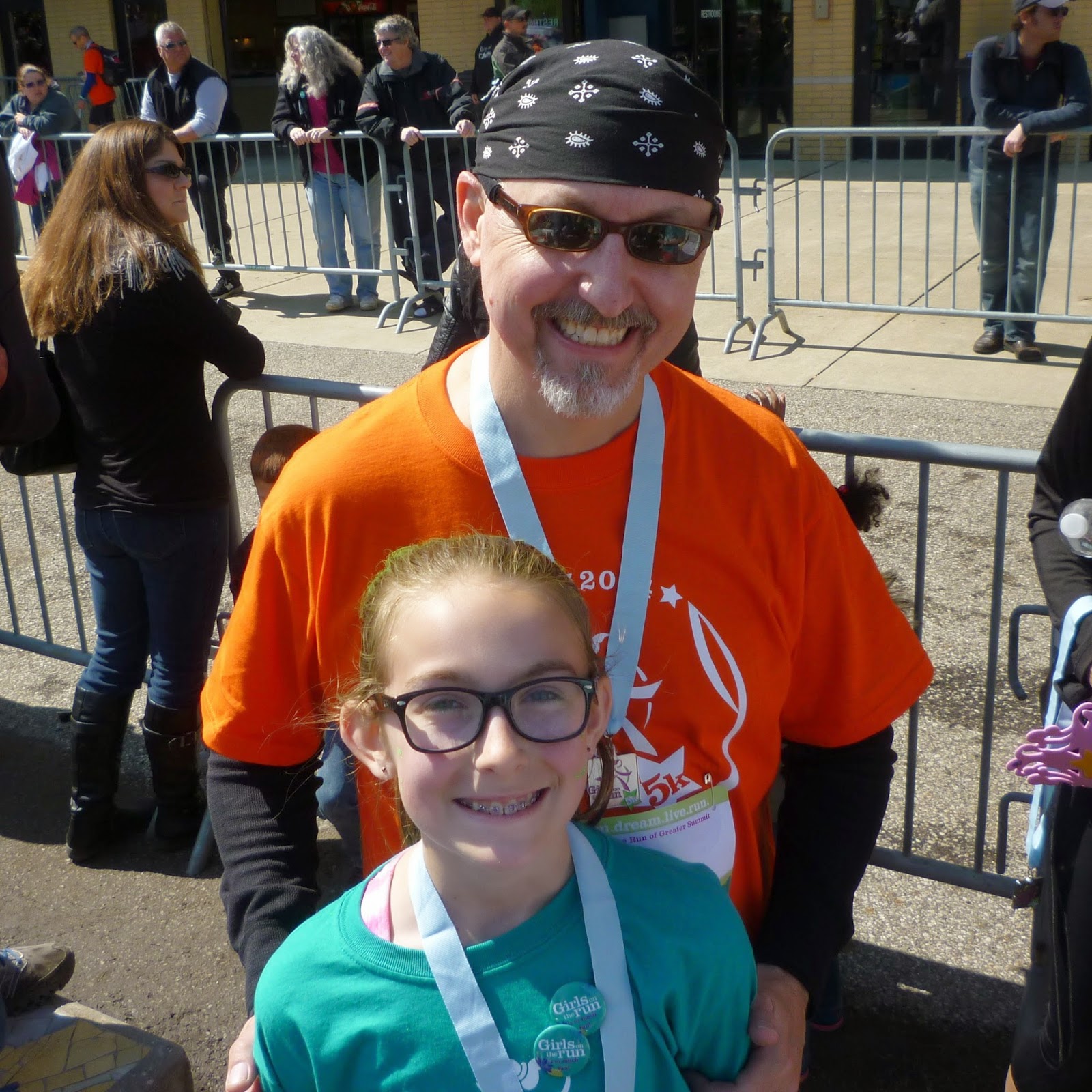 *The race began in waves. Ours was the second wave to start, a little more than two minutes after the official start time.

The forecast for this morning included a frost warning, and though it was a little chilly that could not quell the excitement of these fifteen or so girls, from Boulevard Elementary as they - we - congregated outside the school, having bagels and orange juice before the bus would take them to Lock 3 in Akron for the big race, the race they had been training for all winter.

There was no actual frost on the grass, as far as I could see.

She wanted to run the entire route without stopping, and boy did she. Only one of her colleagues finished the race before her, her nemesis Vincent, the only boy on the team by virtue of his mom being one of the coaches (for the record, his dad ran the CLE Half this morning in something close to 1:30, which is totally awesome and a feat I may never accomplish.)

I wasn't sure how close to get to the girl as she ran. This wasn't a daddy/daughter event, this was about the girls, on their own, so I hung back a dozen or so yards, she didn't know I was even there. But as her team mates took a break or began to walk, she was eventually entirely on her own, running on her own. I still stayed back, she's very independent and I didn't want her to be distracted by me at all.

By the time the race started it was in the mid to upper fifties, just a beautiful day for running, really. As we came into the homestretch on the Towpath, we passed a parking lot and I remembered that this was the spot where the Kids 1 Mile Fun Run started back in 2007 ... I had just run the Akron Half Marathon, and after my wife run with the girl while I pushed the boy in the stroller on just this section of the Towpath, finishing in pretty much the same place as we did today.

Amazing to me, she remembered this without my having to tell her. 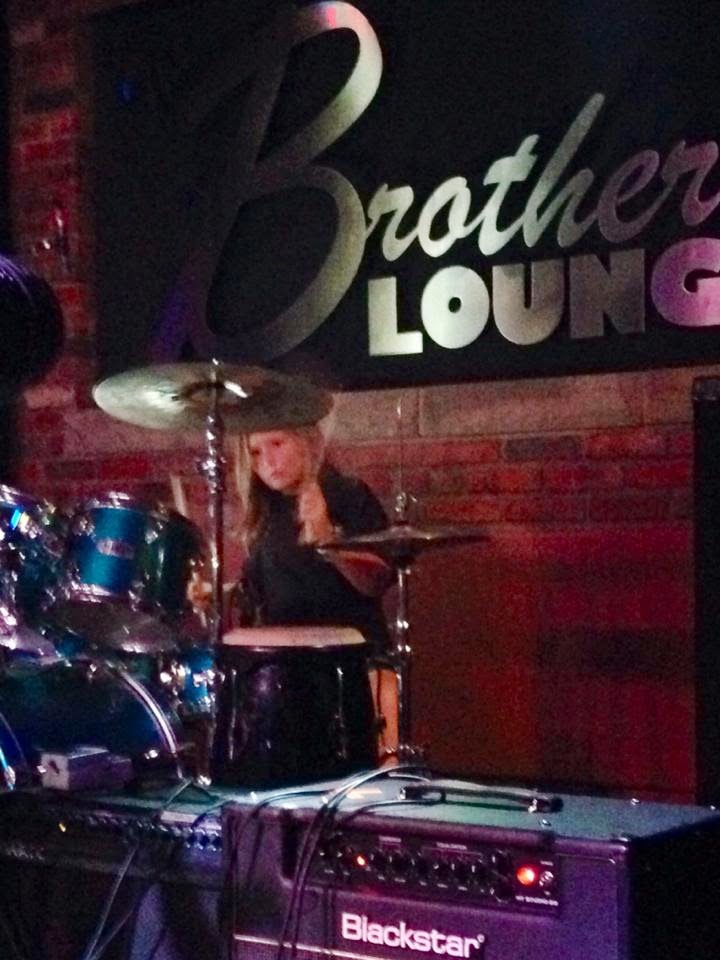 This is my son.

A great Mother's Day. Yes, I made bacon dippers and the best mushroom omelette ever. There were soccer games and the boy played Brothers Lounge for his second and final gig for the spring session.

We went to Dewey's and I came another step closer to finishing the first draft (or sloppy copy, thank you, Mrs. Dawson) of a new work and then had to negotiate an intra-neighborhood conflict.

I made it through my entire childhood without getting into a single fistfight, and you can bet I did not accomplish that by keeping my mouth shut. I did it by walking away, every single time. I am not sure the same tactic is going to work for him.

Another Solid Reason Not to Do a Mud-Obstacle Run
Endurance races that involve electrical shocks, ice baths, and pools of stagnant farm water are acutely popular. No one tells you about the bowel infections.
- The Atlantic *

This Must Be The Place Playlist
Dance Yrself Clean - LCD Soundsystem
House of Cards - Radiohead
Girlfriend In a Coma - The Smiths
Cape Cod Kwassa Kwassa - Vampire Weekend
Modern Love - David Bowie
Do You Realize - The Flaming Lips
Boys Don't Cry - The Cure
Posted by pengo at 9:16 PM No comments:

With burning feet we run. 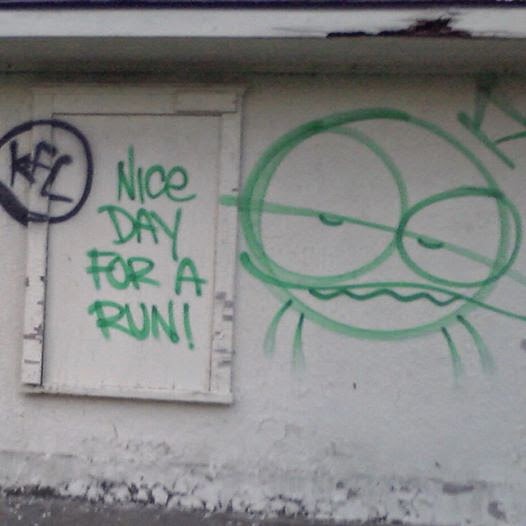 Question: Can you go running when you had the beer first?
Answer: Yes, because you were drinking while doing yardwork, and beer consumed while performing household tasks contains no alcohol. Or calories.

The boy began studying at School of Rock this winter. He has been playing the drums since he was six, but this was his first time working with a band. He insisted in January that he would not be performing live, on-stage, in front of an audience.

Today he and the band Screaming Lemons played Seven Nation Army by the White Stripes and Money Maker by The Black Keys live, on-stage, in front of an audience at Brothers Lounge.

And last week the girl ran a complete five kilometers, next week she runs in a 5K race. She is eleven, a week from tomorrow the boy turns nine.

My children are passing me.

Rise Above Playlist
Rise Above from "Spider-Man: Turn Off the Dark"
All That's Known from "Spring Awakening"
The Beat Goes On - Beady Eye
Letters from the Sky - Civil Twilight
Heartland - U2
Symptom - Atlas Genius
This Is What Rock N Roll Looks Like - Porcelain Black ft. Lil Wayne
After the Disco - Broken Bells

Huh. Genius generated a playlist based on a song from Spider-Man that was entirely made up of singles downloaded free from iTunes from non-names bands who want to sound like U2.
Posted by pengo at 7:34 PM No comments:

How could I forget.

Seriously. 84 degrees after 7 PM. Never thought I would be warm again.

Last Friday the girl ran her first 5K, straight through, at Girls On The Run. The big race in Akron is in 10 days. Also, the boy turns nine. It never stops.

Running feels so good now. Apparently Vibram has settled a lawsuit regarding their FiveFingers because someone actually sued them when they didn't feel any better after running while wearing them.

Huh. Okay, I'd say that's like suing Ron Popeil because his crap doesn't really make cooking any easier - not that it isn't a viable suit, based on each company's sales pitch, just that you look like a jackass admitting you believed it.

I eschewed FiveFingers for Vibram's Minimus. Maybe the fact that my feet feel strong and fit and free of pain - as do my knees and hips and everything that used to trouble me - is not because of the shoes, but all in my head. But if I weren't satisfied with the shoes, once I'd used them ... I think I'd just throw them away.

There's nothing here to run from.

Okay. That was better. Much better, thank you. There are days I believe I will never be motivated to run ever again. And then there are days like today.

Good news. Experienced happy-making theater that made me cover my face like Stefon. Moved the goal posts forward at work. There may be a new project this summer, a good one.

And then there is bad news, sad news. News to make headlines, as time moves inexorably to the end.

Then the evening concludes with a viewing of Monkey Business with my son, which is a great way to end any day.

That and a run.

Last night I learned what I feels like to get your finger caught in a car window. I won’t explain the details. It was excruciatingly painful, and relentless until the perpetrator could push the same button the automatically roll down the window that had just been pushed to roll it up.

It did not break the skin, nor bone, but something like all the blood vessels in the tip of my finger. The nail will no doubt eventually come away. Jesus Christ. That could kill a small child if one got its neck stuck in there. Horrible.

Anxiety for what? No idea. The girl had an allergy attack at Dazzle the District last night, and fortunately we were there with friends, so the boy could stay with them until the final hurrah, but we had to go. I do not know exactly why this mixture of events came together in such a way to make me feel sick in my stomach (as it remains, right now) but the boy is currently at baseball practice and the girls are away at soccer. Yardwork be damned (and it is, damned, I say) this is a moment for a run if ever there was.

Turn Down For What Playlist
Rebirth of Slick – Digable Planets
Make Some Noise – Beastie Boys
Boom! Shake the Room – DJ Jazzy Jeff & The Fresh Prince
Bezerk – Eminem
Sugar – Flo Rida fr. Wynter
Catch Me If You Can – Outasight
It Takes Two – Rob Base & DJ EZ Rock
Posted by pengo at 2:54 PM No comments: 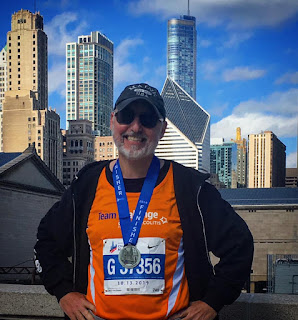